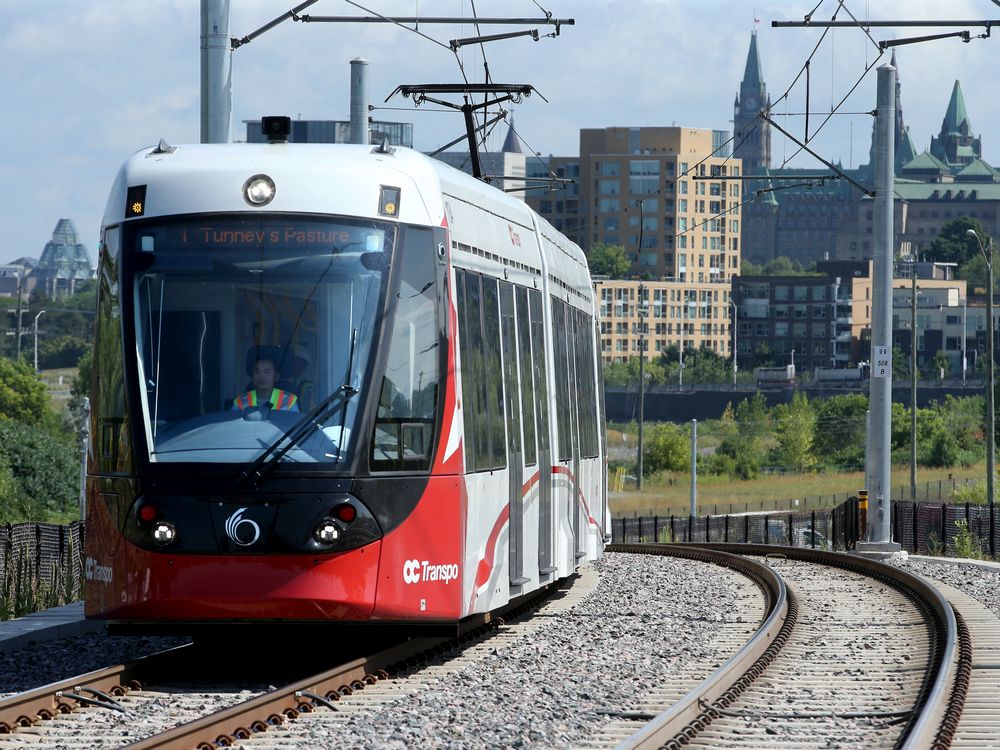 Ottawa commuters will be able to ride the rails of the Confederation Line beginning Saturday, Sept. 14.

“It’s been hard not to smile the last couple of hours,” Mayor Jim Watson said, beaming as he made the announcement in council chambers, where city, federal and provincial politicians, along with other VIPs and members of the media, gathered after being given an end-to-end run on the 12.5-km LRT.

The much-anticipated “revenue service availability” date — the Confederation Line’s opening day — comes 17 months after the Rideau Transit Group consortium that built the $2.1-billion system promised it would be ready.

There have been three missed deadlines since then, including as recently as last week, for which the city confirmed Friday it will withhold an additional $1-million payment as a penalty to RTG.

The handover triggers the city’s final $202-million payment to RTG, minus the $1-million charge for the missed Aug. 16 deadline and an additional $35-million holdback for other city costs such as rental agreements and other expenditures. That payment will come five days after the LRT goes into revenue service.

Final testing of the system was completed on Thursday when a panel of observers led by an independent certifier, with input from the city, OC Transpo and RTG, agreed that the system had successfully completed a 12-day test run.

With that, Watson accepted a ceremonial “key” to the train, and next OC Transpo will kick off an intensive three-week period of drills and tests to ensure opening day runs smoothly and safely. As part of that, Ottawa police, fire and ambulance services will conduct practice rescues and emergency responses throughout the system.

The 12-day test period that cleared the way for Friday’s announcement began July 29, immediately after the city verified that RTG had reached substantial completion of the system. That left many councillors questioning why a 12-day test period had dragged on for 25 days.

Transportation general manager John Manconi explained the detailed and complex scoring method the certification team used to evaluate the LRT performance. One of the requirements was that for nine of the 12 days, the LRT run at a “dependability” percentage of 96 per cent.

The first few days of testing did not go well, he acknowledged, and the 12-day clock was reset to zero a couple of times. For less serious problems, the contract allowed RTG to ask for up to three repeat days before the clock was reset. In all, the test period lasted 14 days, including two repeat days, Manconi said.

On the final three days of testing, RTG achieved 97, 99 and 97 per cent dependability, he said.

The contract defined “dependability” based on a complicated assessment that included whether all trains were ready for service, that they arrived at the station on time, that additional service such as ventilation systems worked properly — all the myriad parts needed for an LRT to carry 200,000 travellers a day safely and efficiently.

“There’s no such thing as an error-free transit system anywhere in the world,” Manconi said. “You cannot have 100 per cent dependability.”

Manconi also revealed that the LRT could meet all its service demands using just 13 double trains, not the 15 trains originally projected. He said falling ridership meant the additional trains won’t be needed — at least initially.

“Fifteen was the forecast when this bid went out,” Manconi said when questioned by Kitchissippi ward Coun. Jeff Leiper. “The ridership went down dramatically. You don’t need to be running 15 trains in the morning and afternoon rush hour to meet the service requirements. And the more (trains) you put out, the more it costs. Thirteen trains will handle it.”

The city bought 17 trains in total, including two spares.

The briefing also addressed the complaints from some residents who live near the track that the LRT is noisier than promised. The city has hired an expert to study the problem. Most of the noise comes from the sound of the wheels on the track, and the city has asked RTG to grind and polish the rails to smooth out the ride. It’s also looking at installing weighted rubber dampers, where the rails are attached to the rail bed, that are engineered to the specific frequency of the noise being generated.

Four key dates are coming up for OC Transpo users: On Sept. 1, the bus schedules on many routes return to normal after summer service reductions. On Sept. 14, the Confederation Line begins service. Oct. 1 marks the end of a fare freeze and the implementation of 2019 fare rates. And, on Oct. 6, a new bus network rolls out, one that is integrated with the Confederation Line.

A new website, an updated phone app and a mailing to every address in Ottawa will give residents all the information they need to use the system.

In accepting the keys to the LRT, the mayor called it a “truly transformative” moment for the city that will lead to “transit-oriented development”.

He thanked the federal and provincial governments, which are each sharing in a third of the cost of the system, as well as residents who’ve put up with years of construction and detours during the work on the first phase of the LRT.

“Crews are already hard at work on Stage 2 LRT so we can bring the benefits of clean and efficient rail service to more communities in the south, east and west,” Watson said.